Through out the semester our Endangered Specie and Languages class has discuss many implications of what happens after a species or language is lost. After the 14 weeks, we have come to the conclusion that, whatever the case may be, extinction is bad at least from the lost of diversity on our planet. When a small population of beetle go extinct, the world may not any different than if it had not. However when a language goes extinct, a whole culture, an entire way of life, and a group of people go extinct as well. As part of our final assignment our class was asked to research an endangered language to help make the language more visible in an attempt to help make the language survive. I have chosen Tewa.

III: I WONDER HOW MY HOME IS

Today, the home of the Tewa people is reduced to 6 pueblos: Nambe Pueblo, Pojoaque Pueblo, San Ildefonso Pueblo, Ohkay Owingeh, Santa Clara Pueblo, and the Tesuque Pueblo. All but the Ohkay Owingeh Pueblo are in New Mexico. The Arizona Tewa at Ohkay Owingeh are the descendants of the Tewa that sought refuge during the Second Pueblo Revolt and currently live on the Hopi reservation. 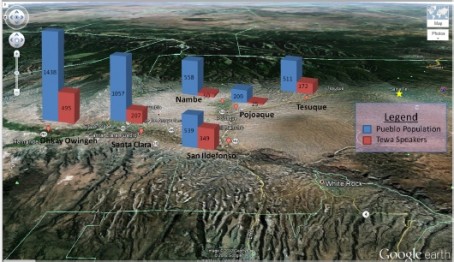 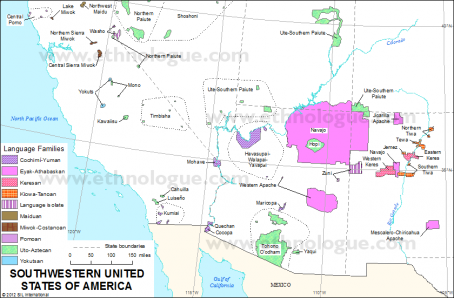 Map of language groups of the American Southwest by the Ethnologue in 2012.

Past and Present Threats:

The first threat that started the decline of the Tewa people and language was Spanish Conquest. The First and Second Pueblo Revolts resulted in large losses of speakers. Introduced diseases by the Spanish caused another great decline in the population. American Indian schools cause another loss in speakers of the language. The  U.S. government used these schools to assimilate the Tewa people into American culture by forcing Native children from their homes. The children were unable to speak their native tongue and  were beaten or forced to eat soap, if found guilty of speaking anything other than English.

Tewa is the most endangered language in New Mexico. Even with large conservation efforts, the number of speakers is still dwindling. Today, Tewa is spoken on all 6 pueblos and is  traditionally an oral language. However in the 1960’s, the language began to adopt the Latin syllabary. Each pueblo developed their own orthography, which makes learning and standardizing the language difficult.The first dictionary was published in 1982 by the San Juan Pueblo and is still used as a primary resource for translation. 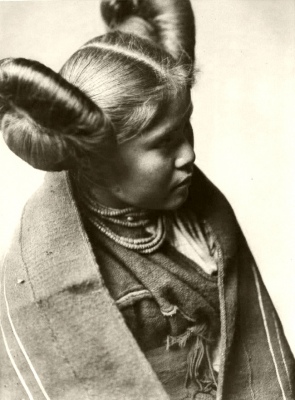 There are many conservation efforts done independently among the Tewa pueblos. Each with their own language school programs that emphasize teaching younger generations. 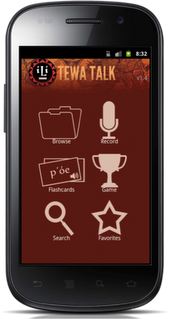 Smartphone applications are the one of newest ways to conserve languages. Being one of the most endangered languages in New Mexico, the Tewa language has been chosen by the Worcester Polytechnic Institute to become one of the newest language learning mobile application. Tewatalk is exclusively an android based application that teaches through fashcards, recordings, games and an interactive dictionary.

Most students leave the pueblos to attend schooling sometime before they graduate from high school. In the past, when students have left the pueblo to go school they also left their language curriculum behind. In 2009, the Santa Fe Preparatory school started a pilot program that allows students to learn their native tongues for “foreign” language credit.  From the Heart Productions made a documentary about a few Tewa Students that has greatly benefited from this program.

Three Stories in Tewa  Pehtsiye Aye has been digitized and have been made available online by the University of New Mexico. Pehtsiye Ayhave included illustrations that resemble life on the pueblo to help create a connection to the language. This book includes: 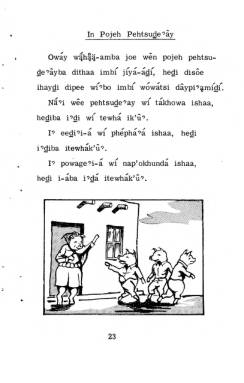 What Can You Do to Help?

Their are many ways you can help while at home anywhere around the world and the first is donating. I have listed below websites where you can help support Indigenous language programs that will help the Tewa language, as well as other endangered languages, survive. I also added a link to Tewa Women United, which is a organization that helps combat educational, social issues and all forms of violence against Native Women and girls. By helping the Tewa people we can help the language and more importantly the culture survive. 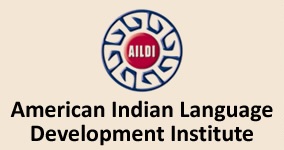 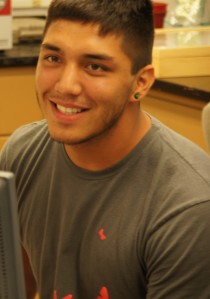 Want to Know More about my Species?

American Sycamore as a biomass species