The Tatarian Honeysuckle is a perenn low-maintainance shrub native to central Asia and southern Russia. It stands upright with an oval to rounded shape, approaching between 9 and 12 feet at maturity. It was introduced as an ornamental plant in North America in 1752 and has since then spread tremendously and invaded many natural areas. While the plant continues to be used for ornamental purposes, it is notoriously regarded as an invasive specie that inhibits biodiversity. 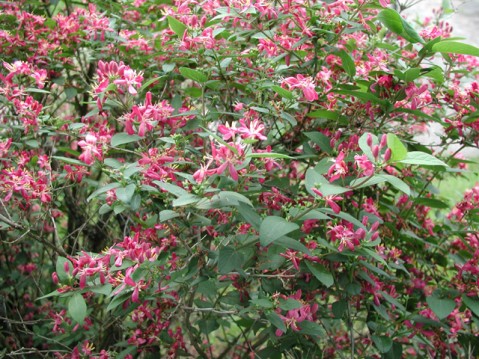 Leaf: The leaves are between 1 and a half to 2 inches in a half long, and a half an inch to one and a half inches across. They are ovate with slightly cordate bases and smooth margins. They are simple, entire and accuminate, with their apexes extensively pointed. There are two leaves per node, growing on leaf stalks along the stem.

Flower | Fruits: The tubular flowers are white, pink or red and develop from the upper axils of the leaves. They appear at the end of a slender pedicel, generally around an inch long.  They are three quarters of an inch long and across. They consist of  a corolla with five long and narrow petals, five stamens composed of white filaments and yellow anthers and a pistil carrying a single style. At the base the corolla is tubular, but develops upward into five spreading lobes. The blooming period occurs during late spring or early summer and usually lasts about three weeks. The flowers release the sweet fragrance of honeysuckles, consequently earning the iconic name Tatarian Honeysuckle.

The flowers are replaced by pairs of berries, which achieve a bright red color and juicy flesh at maturity. Each berry about a quarter of an inch across, contains numerous seeds.

Twigs: Hollow, glabrous. Brownish to gray during the winter.

Trunk | Bark: The bark of older branches is grayish brown with narrow ridges, and with age there appear vertically shredded strips of bark. Young shoots are light green to reddish brown and glabrous to slightly pubescent and smooth. The branches are rather fragile. 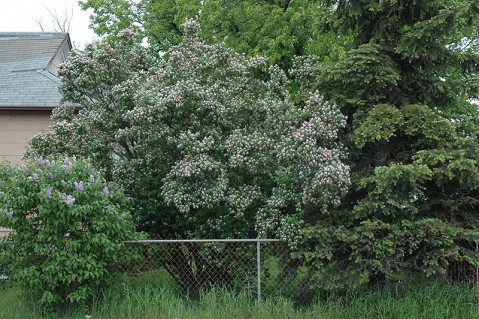 The Tartarian Honeysuckle is non-native although it has naturalized and become common in certain areas of Illinois, especially in the Northern half of the state. It is widespread throughout North America. It is present in the northern regions of Alaska, down to central provinces of Canada such as Saskatchewan and Manitoba, to the Rocky Mountains, Plains and Great Lakes of the United States, all the way south to Texas and New Mexico. Its range stretches from the west regions of California and Oregon to the east and northeast of the United States and Canada.

The plant grows in a wide variety of soil and environmental conditions. It is most commonly found in woodlands, thickets, and disturbed habitats or urban areas including roadsides and other neglected sites. It can withstand flooding, drought and although it prefers full sun, it can tolerate shade. Lonicera tatarica is categorized as an invasive plant. It tends to spread rapidly and invade natural areas, thus reducing biodiversity. It restricts the growth of native plants, and particularly inhibits the development of ground layer species by forming a dense understory thicket. Those able to thrive are eventually outcompeted, as the Tatarian Honeysuckle shades the ground and depletes the soil of moisture and nutrients. Its rapid spread is caused mainly by the consumption of its berries by birds. 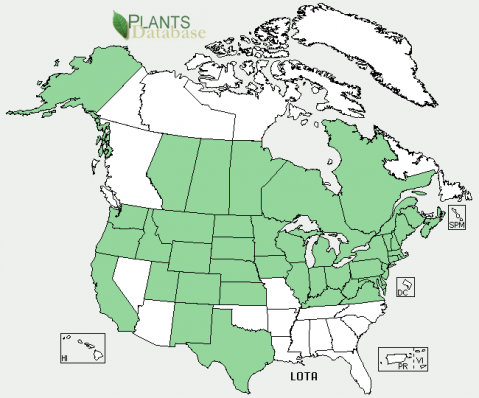 Non-human: The nectar and pollen of the flowers attract numerous pollinating birds such as the Hummingbird and the Ruby-Throated, and various bees. Insects feed on the leaves and other parts of the foliage while the berries are eaten by birds, notoriously Robins, Starlings and Cedar

Humans: The Tartarian Honeysuckle is used for ornamental purposes. When blooming its bright pinkish flowers can provide an attractive sight. Also, because of its medium size and considerable density it is often used to create hedges. Although rare, private nurseries have been known to cultivate this species for retail purposes.

Disease: Witches broom (a disease causing deformity where the structure of a plant is altered and a significant number of shoots grow from a single point, resulting in a broom-like shaped structure.) caused by Russian aphids. 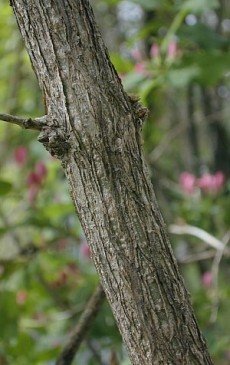 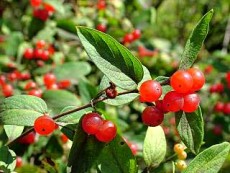