The species name  of Anemonella thalictroides (formerly Syndesmon thalictroides & Thalictrum anemonoides) alludes to this plant’s leaves “like meadow rue,” while its genus name “little windflower” refers to the blooms as looking like miniature anemones. At any given moment the little plant is not terribly floriferous, as it sometimes seems as though buds are waiting to open one to five at a time, but never a great many all at once. It makes up for this reticence by blooming continously through spring.


Flowers of rue anemone range from white to lilac-pink; but ours is such a faint shade of lilac it is nearly white, & ranging more toward a hint of blue rather than pink. The usual yellow anthers are in this case  yellow-green. Reddish stems arise from the tuberous root in late March, as shown in the second photo. The leaves emerge purple but quickly turn purplish green, & are joined by the flowers immediately in April, lasting well into June. 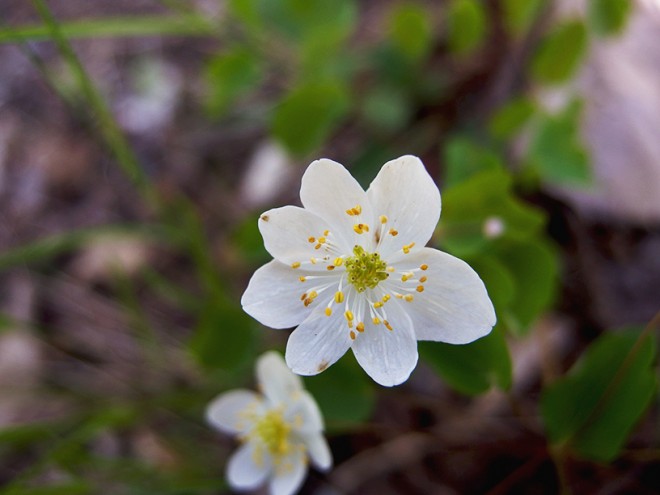 Leaf: Opposite. Basal leaves biternate to triternate, appearing at anthesis, petiolate. Petioles to +12cm long. Leaflets shallowly 3-lobed or just notched, to +2cm long, +1.5cm broad. Cauline leaves forming an involucre at the base of umbel rays, ternate. Leaflets similar to those of basal leaves.

An effective bright-shade plant for chilly & temperate zones, this Great Lakes, Midwest & Southeast native wildflower asks for moist well-draining soil. It can seem to be drought tolerant at times, but it will really only bloom well if kept moist. It naturally dies back in summer, & will do so more quickly if dryness triggers its sense that summer’s upon it. Before it dies back it develops endearing ribbed seedpods arranged like petals.

Growing nearby are equally little Anemone nemorosa “Robinsoniana” & A. nemorosa “Vestal” wood anemones. These are similarly long-flowering but die back in summer.

Light
Conditions : Partial sun, partial shade
Part sun or part shade plants prefer light that is filtered. Sunlight, though not direct, is important to them. Often morning sun, because it is not as strong as afternoon sun, can be considered part sun or part shade. If you live in an area that does not get much intense sun, such as the Pacific Northwest, a full sun exposure may be fine.
Watering
Conditions : Moist and well drained
Moist and well drained means exactly what it sounds like. Soil is moist without being soggy because the texture of the soil allows excess moisture to drain away. Most plants like about 1 inch of water per week. 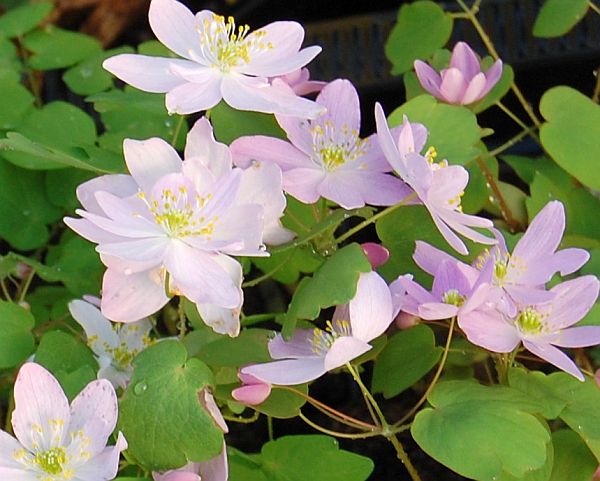 Non-human: The   flowers offer only pollen as a reward to insect visitors. Typical floral visitors include various bees, syrphid flies, and bee flies; the bees usually collect pollen, while the flies feed on pollen. Some of these insects explore the showy flowers for nectar in vain. Honeybees, little carpenter bees (Ceratina spp.), cuckoo bees (Nomada spp.), mason bees (Osmia spp.), halictid bees, and andrenid bees have been observed as visitors to the flowers. Because the foliage is toxic and relatively inconspicuous, it is usually ignored by mammalian herbivores.

Fungi : Rusts
Most rusts are host specific and overwinter on leaves, stems and spent flower debris. Rust often appears as small, bright orange, yellow, or brown pustules on the underside of leaves. If touched, it will leave a colored spot of spores on the finger. Caused by fungi and spread by splashing water or rain, rust is worse when weather is moist.

Prevention and Control: Plant resistant varieties and provide maximum air circulation. Clean up all debris, especially around plants that have had a problem. Do not water from overhead and water only during the day so that plants will have enough time to dry before night. Apply a fungicide labeled for rust on your plant.

Fungi : Powdery Mildew
Powdery Mildew is usually found on plants that do not have enough air circulation or adequate light. Problems are worse where nights are cool and days are warm and humid. The powdery white or gray fungus is usually found on the upper surface of leaves or fruit. Leaves will often turn yellow or brown, curl up, and drop off. New foliage emerges crinkled and distorted. Fruit will be dwarfed and often drops early.

Prevention and Control: Plant resistant varieties and space plants properly so they receive adequate light and air circulation. Always water from below, keeping water off the foliage. This is paramount for roses. Go easy on the nitrogen fertilizer. Apply fungicides according to label directions before problem becomes severe and follow directions exactly, not missing any required treatments. Sanitation is a must - clean up and remove all leaves, flowers, or debris in the fall and destroy.

“How many Flowers fail in Wood —
Or perish from the Hill —
Without the privilege to know
That they are Beautiful.” 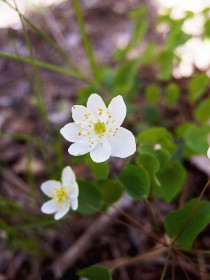