The rich, moist wooded ravines that cradle the Lake Forest College campus contain one of the region’s rarest ecosystems.

These ravines occur only in a 2-mile-wide band along a 20-mile stretch of Lake Michigan’s southwestern lakefront, carved by streams out of the glacial moraine (sediment deposit) over the 12,000 years since the last ice sheet receded.

They represent a floristic treasure trove of rare and endangered native plants, with over 50 plant species found in few, or no other places in the entire State of Illinois.  The ravines on our campus are some of the most botanically-intact examples of this ecosystem in existence. 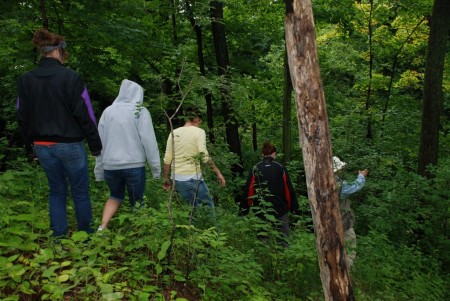 The ravine that divides Lake Forest College’s North and Middle Campuses is named after Witchhazel (Hamamelis virginiana L.), a native small tree of the forest understory.  A beautiful plant found only in relatively undisturbed forests of the region, it grows in great abundance in all of the campus ravines.  It is the only local tree that flowers in the early winter, and oil from its bark is thought by many to have medicinal value.

The ravine the forms the southern border of Middle campus is named after Bloodroot (Sanguinaria canadensis L.), a small understory perennial wildflower.  The name, “Bloodroot” refers to the bright red color of its sap, which derives from toxic alkaloid compounds that defend the plant from herbivores.  Bloodroot produces beautiful white blooms around Easter, and has very distinctive, unusually-shaped large leaves.  Bloodroot is one of a fascinating group of plants called “spring ephemerals,” so named because they carry out their entire photosynthetic life cycle (the time when they are green and active) before the trees have leafed out in spring, when lots of sunlight is hitting the forest floor where they live.

Spring ephemerals such as Bloodroot, abundant and diverse in the Lake Forest College ravines, are found only in relatively undisturbed old growth forests, and include some of the rarest and most beautiful wildflowers of the region.